Five element acupuncture has been part of Chinese medicine since the 10th century BC. The concepts first appeared in several books on philosophy such as Shu Ching and the Li Chi and the Guan Dzu. The first medical writings were found in 200 BC by the Nei Chin Su Wen. It was later discussed by Shu Nan Ching. Five element concepts are not only of medical theory but an integral aspect of all Chinese cosmetology and philosophy.

The levels of function range from biochemical processes to the function of the organism as a whole. This includes behavior, psychological state, relationships, career choices, and the like. The diagnosis of the five elements in a clinical setting is done through the use of a system of correspondences. Each element has a series of correspondence involving the macrocosm, the season, the time of day, the climatic condition, the microcosm, the taste in food, the emotional state, their color, body odor, body orifice, sense organ, body tissue, and the corresponding organ system.

The Nei Chin Su Wen describes the macro to microcosm of the wood element as such:

Further correspondences with five elements include the emotional state, which is of great clinical usefulness when assessing the elements.

The abnormal emotional aspects are as follows: 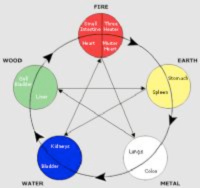 Within each element there are officials. Officials are described as defined not by physical properties but by specific roles in the processing, storage, and distribution of vital energy and therefore the maintenance of life.

For example, the gall bladder is responsible for what is exact and just and the determinations and decisions stem from that whereas the liver holds the office of general assessing circumstances and conceptions of plans. If these officials are poorly functioning the effect may be indecisiveness, lack of initiative, anger, and frustration or hypochondriasis. The ability to make appropriate plans is affected and disturbance in the blueprint for functioning on the cellular level such as diabetes on a global level such as drug addiction might be the outcome. According to the Nei Ching the wood element provides the ability to discover the tao, the right way. This allows the person to have healthy decision-making, planning, and a balance in well-coordinated lifestyle. The wood element is associated with new ideas, the spring, the new growth, and the sense of renewal that goes with that season. The emotion associated with wood is anger, which is generated by the frustration of being blocked in setting out on these new paths.

The Nei Ching states of wood, “colors they create that bring color, and they give to the human voice the ability to form a shouting sound, in times of excitement they grant the capacity for control, and of the emotions they create anger.”

In five element acupuncture, illness occurs when the officials are unable to overcome either internal, such as excessive emotions, or external, such as injuries, surgery, climatic conditions, or inherited perverse energies. What appears to a physician at the onset of a present illness is often a combination of a long sequence of energetic disturbances in the officials of the elements.

A five element acupuncture physician in the physical examination focuses on the correspondences available to the patient, facial color, the sound of the voice, emotions expressed, the odor of the torso, and the general presentation of the person. Importance is made in the traditional pulse diagnosis with the emphasis on the individualization of the twelve officials. The history is thorough and complete and emphasizes chronological events. The goal of the evaluation is to determine the official which is the causative factor, that aspect of the energetic system which is at the root of the imbalance overall for the patient.

The causative factors are either inherited or an acquired condition. If acquired it is often the result of childhood experiences that created disequilibrium. Traumas from the physical, emotional, infectious, and climatic nature will then bring on the causative factor or pathological state with the symptoms occurring then.

There are several laws in acupuncture that determines what the configuration of what the patient’s symptoms may be. These laws include the law of creating that is the shen cycle, the loq of control that is the KO cycle, midday and midnight cycle, and mother-child cycle.

The shen cycle is best understood in the macrocosmic images of the five elements. The wood produces plants and trees that is wood, wood brings forth fiver, fire produces ashes that is soil (earht), soil brings forth metal, when heated metal produces steam that is water.

In illness, for example, of the wood an imbalance of this element would cause symptoms to be seen in the wood in the fire through the shen cycle or in the earth through the KO cycle.

J. R. Worsley, an English professor of acupuncture, a leading exponent of five element acupuncture came up with the concept that is important in today’s medical practice that is the level of illness. The levels reflect the depth of the illness within the person physical, mental, or spiritual.

In our society today there are many people with chronic illnesses on what could be called a spiritual level. These patients appear unwilling to change, seem empty of purpose or commitment, and create a deep drain on the physicians and the medical system. Patients with mental level illness are constantly trying to figure out their problems and often are obsessed with the needs to understand what is happening. A physical level illness actually represents the smallest percentage of the patients seen in today’s modern medical practice.

Once the causative factors are established, the level of illness is understood, the laws of acupuncture are fully comprehended then treatment will proceed in a very effective manner.

For example, in a case of a wood element for what might be expected to be improved is judgment, healthier decision making, less hostility, less need for control, clearer vision of future needs. From these changes a myriad of physiological and psychological pathologies can improve as the wood element returns to normal functioning on all these levels.

The improvement and function of one official of an element will lead to a dramatic changes in the individuals overall well being. When the twelve officials are all in a state of balance then one is well suited to deal with the challenges of human control.

When a physician is dealing with a complex patient with a multifaceted problem, it is a challenge to place the information in context that can lead to effective treatment. It is in this aspect that the five element acupuncture is most persuasive. The current ideas of spsycho-neural immunology are seen within the five element concepts of causative factor officials in level of illness. Both physical and emotional symptoms can be placed within the diagnostic framework and the most significant of all aspects of the five element approach is that it allows us to treat the patient/person who has the disease as well as the symptoms themselves.

Your Partner in Osteopathic Wellness Care